Share
Tweet
Pin
Update as of August 13, 2013: BIR issued Revenue Memorandum Circular No. 52-2013 extending the use use of unused/unissued principal and supplementary invoices printed prior to January 18, 2013 is extended to October 31, 2013, subject to following conditions which you can read here.

However the deadline for filing an
application for the printing of new receipts to replace all unused/unissued
principal supplementary receipts/invoices printed prior to Jan 18, 2013 shall
be maintained as of April 30, 2013, and therefore all applications received
after said date shall be considered late application and the penalties for late
filing shall be imposed.

After August 30, 2013, all principal and supplementary
receipts and invoices printed before January 18, 2013 shall no longer be
valid.  Issuance of these receipts shall
be deemed to be an issuance of an invalid receipt or deemed as if no receipts
were issued, and a violation of Section 264 of the National Internal Revenue
Code.
Business Owners, be aware.  The Bureau of Internal Revenue (BIR) will push through with the implementation of the new official receipts/ invoices on July 1, 2013.

Here are samples of how the new official receipt/invoice will look like: 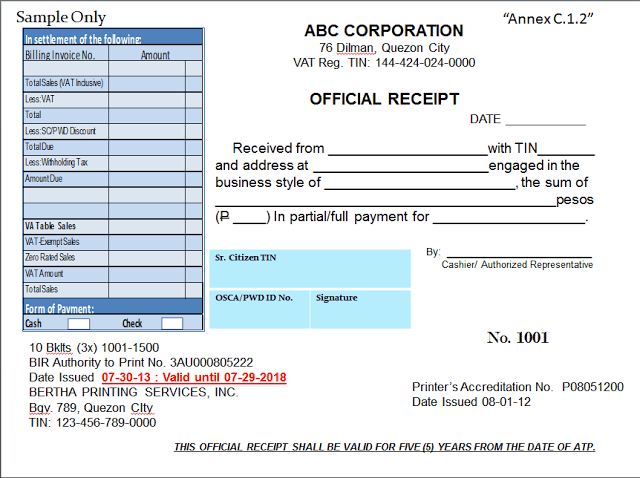 The full
implementation of Revenue Regulations No. 18-2012 requiring the issuance and
use of new sets of receipts on July 1, 2013 shall proceed as scheduled.
Commissioner of Internal Revenue Kim S. Jacinto-Henares said, “The complaints
against the new regulations are without any basis since the tax agency had
issued Revenue Regulations (RR) No. 18-2012 last year and published the same in
the January 3, 2013 issue of the Manila Bulletin informing everyone that existing
receipts will expire on June 30, 2013. We believe that six months is enough
preparation for everyone to comply with such requirement.”
RR No. 18-2012,
published on January 3, 2013, provides among others that taxpayers must apply
for the printing of their new receipts at least sixty (60) days (or April 30)
before the expiry of their old receipts on June 30, 2013 and start issuing the
same on July 1, 2013.
Commissioner
Henares added that “the BIR issued Revenue Memorandum Order (RMO) No. 12-2013
on May 2, 2013 to provide for penalties since very few taxpayers were complying
with the said regulations.”
The BIR said that
taxpayers who apply for authority to print receipts beyond April 30, 2013 shall
pay a penalty of P1,000.00. However, those who apply for said authority beyond
June 30, 2013 and/or on or before June 30, 2013 but failed to use the new sets
of receipts starting July 1, 2013 shall pay the maximum penalty (of P50,000.00)
as provided for in Section 264 of the Tax Code.
The tax agency gave
the following rationale for the issuance of the regulations:
1) The BIR’s discovery
of businesses registered with the tax agency that are not really engaged in any
business except to sell invoices thereby defrauding the government of billions
in tax revenues. These businesses sell their invoices to entities who are
either engaged in smuggling and/or purchasing of goods without receipts. When
BIR looked for these companies, mostly Small and Medium Enterprises, they
cannot be found;
2) The BIR’s
finding that a lot of invoices that were printed in the ‘70s are still being
used and the need to clean these up by providing an expiry period; and
3) The issuances
are aimed at reforming the process of accrediting printers to address
complaints against some BIR personnel engaged in the printing business who make
it difficult for taxpayers to register and/or secure authority to print unless
they get to print the receipts of said taxpayers. The regulations disqualify
printers with relatives working in the BIR.
Related Post: BIR Sets Deadline to SurrenderUnused Receipts

Click To Download This Post As PDF
« On Choosing a Day Care Center
A note for the future: Wyeth Nutrition commits to support Philippine education of underprivileged youth »