The first ever Intel-based Android Lollipop 5.0 device to be introduced in Asia, CloudPad One 7.0 is a result of close collaboration between CloudFone and partners such as Intel. 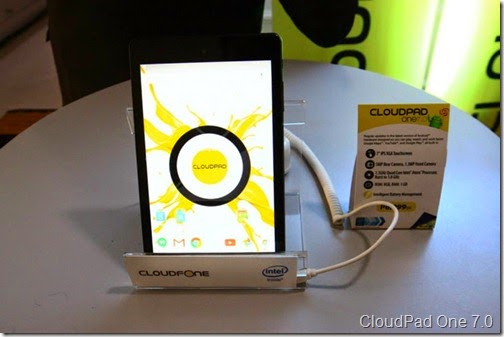 “No other brand takes tablets more seriously than CloudFone. CloudFone is driven to empower Filipinos by continuously innovating to fulfill the promise of Tablets For All, and bringing the latest technology within people’s reach,” said Eric Yu, CloudFone President & CEO. “Our collaboration with industry leaders guarantees that our products are developed with the highest standards of quality, reliability and CloudPad One 7.0 runs on the latest Android Lollipop 5.0 OS and powered by the 1.8 GHz Quad Core Intel Atom. It has 8GB of memory plus 1GB of RAM to store photos, videos, games and other applications that make the tablet experience both enjoyable and productive. The 7-inch tablet is wifi-ready, and Intelligent Battery Management ensures that the tablet can sustain power throughout the day. More importantly, users have the advantage of over-the-air updates within two weeks of release of the latest Android Lollipop OS for up to 2 years.

“The Intel Reference Design for Android (IRDA) was instrumental in enabling CloudFone to become the first local OEM in Asia Pacific Japan to make tablets based on the latest Android OS available in the Philippines. Intel is proud to be working with CloudFone, a homegrown brand that is truly serious about leading edge tablet development and uniquely positioned to grow the tablet market in the country.” said Calum Chisholm, Country Manager of Intel Philippines.  “IRDA delivers a combined roadmap of the latest designs and updates; which, together with CloudFone’s local market expertise, enables CloudFone to easily customize designs based on the demands of Filipino end-users and accelerate their time to market. With the CloudPad One 7.0, today’s consumers can enjoy the best tablet experience with the advantage of the Intel Atom processor and all the latest Android apps.” Chisholm adds.

The CloudPad One is based on the 64-bit platform of the new 22nm Intel Atom chip. Because of this, it support 64-bit applications, and gives the tablets the ability to use more than 4GB of RAM. More importantly, the tablets have better responsiveness because its can fetch more data per cycle, making tablets capable of multi-tasking while improving power efficiency and battery life.

Tablets for work and play

As the tablet usage continues to evolve, CloudFone seeks to answer the growing demand for multitasking on the go. Today, CloudFone gives consumers and busy professionals an even better reason to love their tablets, as it offers rich functionalities that can be used for both work and play. 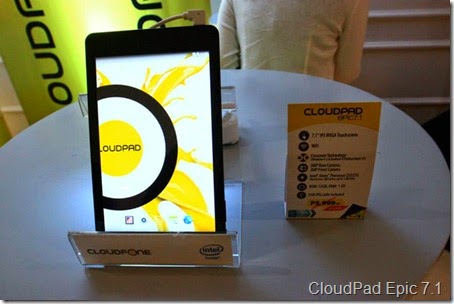 The CloudPad Epic 7.1 and CloudPad Epic 8.9 are two new tablets with CloudFone’s unique Crossover Technology, which allows users to run both Android 4.4 Kitkat and Windows 8.1. This means that users can have the best of both worlds – rich multimedia experience from Android and an ideal productivity environment with Windows. In Windows mode, users have the option to activate Office 365 applications such as Word, Excel or Powerpoint, which have all been optimally designed to work on touch-screen devices. 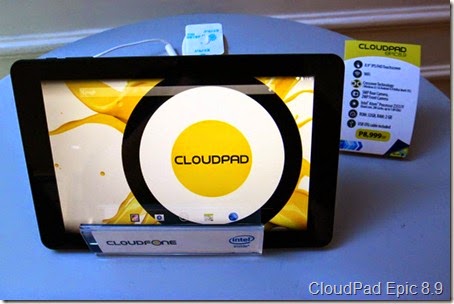 “We are extremely excited to announce this Philippine-first milestone of dual-boot Windows tablets with an industry-leading partner like Cloudfone,” said Jerry Bongco, Director for Consumer Business, Microsoft Philippines. “This clearly differentiates the Windows platform versus our competitors across price, apps and hardware specs parity.”
CloudFone is currently the only brand that offers dual-boot tablets. CloudFone also introduced the CloudPad 8.0, which runs on Windows 8.1 and powered by the 1.8 GHz Quad Core Intel Atom Processor. The 8-inch tablet has 16GB of memory and 1GB of RAM. The most colorful addition to CloudFone’s newest tablet range, it comes in yellow, red and blue for users who value style just as much as performance. The introduction of these new tablets has come at an auspicious time, as CloudFone marks its 4th  anniversary this year. To celebrate, CloudFone is giving special discounts on select tablet models, making their innovative devices even easier to own.
From Php5,999, the CloudPad Epic 7.1 will now have an SRP of Php4,999. The CloudPad Epic 8.0, originally at Php9,999, now has an SRP of Php7,999. The CloudPad Epic 8.9 retails at Php8,999 and the CloudPad One 7.0 is easy on the pocket at just Php6,999.
“CloudFone is a game changer in the tablet market. CloudFone is uniquely positioned to address the country’s strong demand for tablets, with a full spectrum of tablet choices for the widest range of choices and lifestyles,” Yu states. “We are the only company with this kind of investment, commitment and experience in tablet development. Because we specialize in tablets and a deep understanding of the local market needs, we are the trusted partner for Filipino consumers.”
Throughout its 4-year history of innovation, CloudFone has a developed a wide range of mobile devices in the tablet and smartphone categories that will suit any preference and demand. It has been responsible for several groundbreaking developments in the country’s mobile enablement, such as the introduction of the first Android device with mobile TV in 2012; the launch of Thrill 430X, the only Smartphone in the Philippines with a battery that exceed 4000 mAh in 2013; and the release of the first locally-branded Intel-based tablet in 2014.

CloudFone has established itself as a dynamic and leading contender in the ever intensifying race for mobile supremacy both in the local and global arenas. Deeply rooted in the Telco industry, CloudFone’s proactive collaboration with its numerous globally reputable technology partners had enhanced the Company’s mobile technology and handset development capabilities. These, and its exclusive partnership with the giant network operator, Globe Telecom, provide CloudFone with a cutting edge advantage over its peers and competitors. Hence, an array of awesomely crafted, technologically superior mobile handsets and tablets at costs within the buying capacity of the masses.
Click To Download This Post As PDF