Happy Money Monday! For this Money Monday edition, I am again featuring J3 Patino of Game of Wealth with his fun but thought-provoking post on: 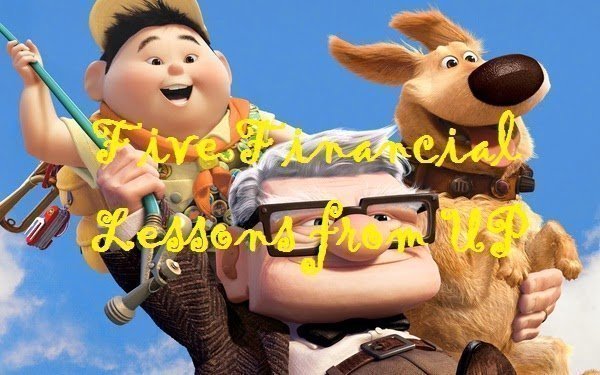 The first time I have watched Disney Pixar’s Up was in a 3D Movie Theater with my son Adrian and my two daughters.  And my 3D glasses were drenched with tears, I am soo not kidding, despite the fact that I had to bring Adrian a million times to the bathroom because he needs to pee real bad!
And I have watched it a couple of times after, and it never failed to make me cry.  He reminded me of my dad, who must have dreamed of taking my mom to travels (that was their plan when they retired).  My mom got sick and eventually passed away.  I kept wondering how my father coped with the loneliness.  All I can tell is that he has lost the sparkle in his eyes.

So, anyway, before I break down here, let me go on with J3’s post.

While J3 was watching UP, he realized that Ellie and Carl
were both financial illiterates. And had they been more financially educated, the story wouldn’t be so
tragic, and maybe they could have made their happily-ever-after together in
Paradise Falls.

So here are the financial mistakes and lessons to be learned from UP.

-the story
begins-
Carl and Ellie meet as
kids, and immediately connect in their desire for adventure. They become close
and promise each other that they will go to Paradise Falls. They grew up
together, fell in love, then got married. 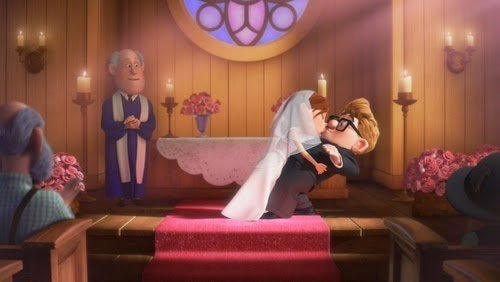 They renovated their old playground, and turned it into their home.  They built their beautiful home, furnished it, painted the mailbox and went on picnics. 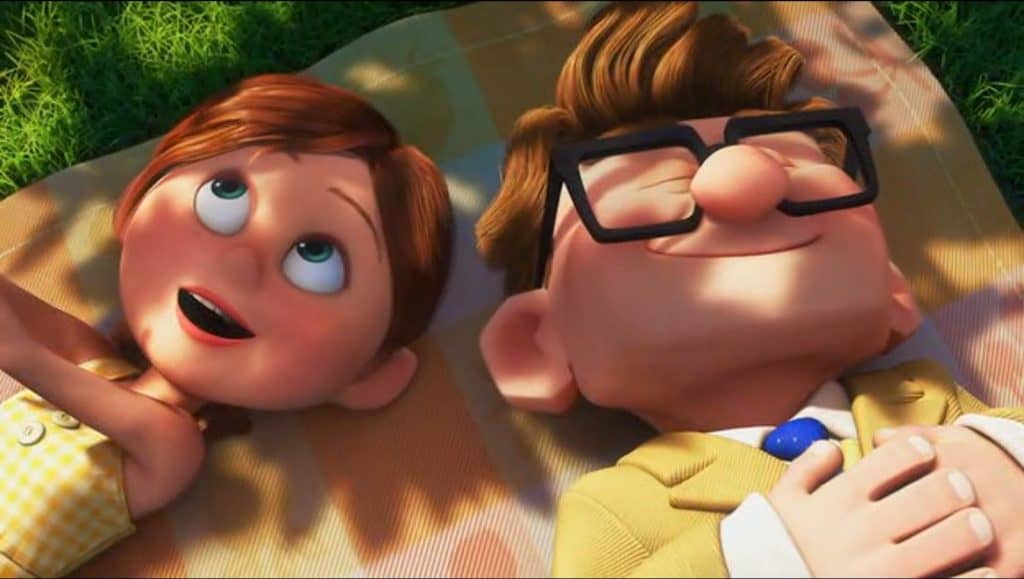 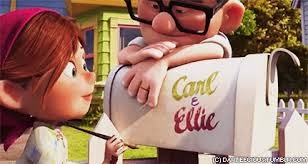 Then they thought about having a baby!  They prepared the baby’s room, but unfortunately, Ellie had a miscarriage… 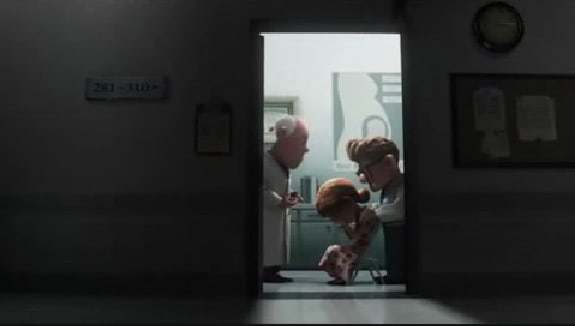 Of course, Ellie had all reasons to be depressed.  (No amount of financial literacy can change this part of the story – just shows you that money is not everything,  But from here on out, their lack of financial literacy will start to have an effect).
In order to move forward from the tragic miscarriage, Carl and Ellie start saving up for their trip to Paradise Falls.  Every day, they put something in their “money jar”. 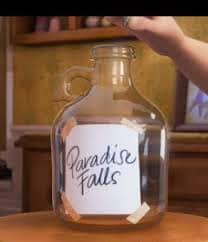 Then the tires of their car break down… 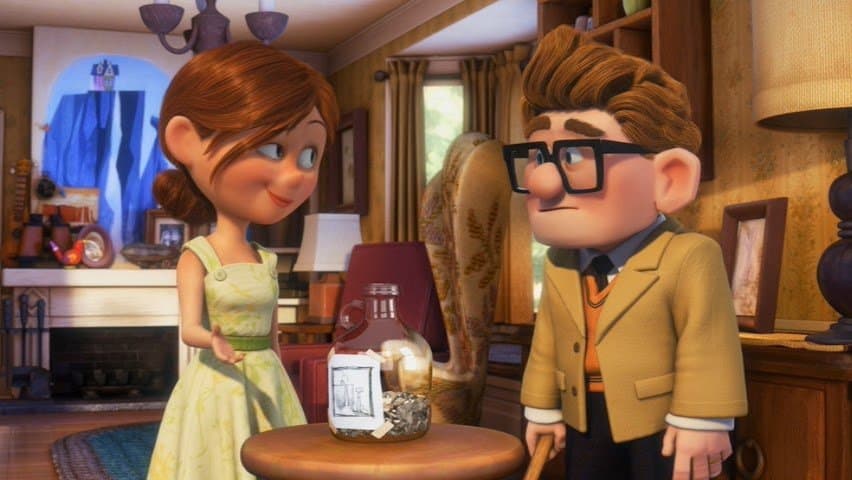 They break their “Paradise Falls” savings in order to replace the tires.

Lesson #1: Have a separate emergency fund.

When saving money for a dream, it is important to FIRST have a separate emergency fund which will act as a “shield.” So when simple emergencies happen, you don’t have to touch any of your investments or the savings dedicated to your dreams.
Having a separate emergency fund also has psychological benefits.  If the dream and emergency fund were mixed together, it could be demotivating to have an accident because then it would be easy to think that the accident prevented you from reaching your dreams.
However, when you have separate accounts for your dreams AND your emergency fund, then when something bad happens, you’ll know that the money for your bigger dream is still intact.
– the story continues –
The savings jar breaking scene is then repeated for a second and third time.  The second time was when Carl got into another accident and he broke his leg.  The third was to fix the roof because a tree feel on their house during a storm.  In both incidents, they again had to get the money from the “Paradise Falls” funds. 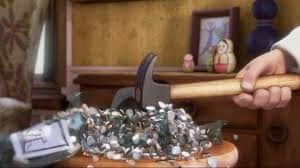 Lesson #2: Get Healthcare and Insurance
Plans

The only predictable thing about accidents is that we will likely encounter them at some point in our lives.  This is what insurance and healthcare solve.  If Carl had a healthcare plan, and if they insured their home, they wouldn’t have to get all the money from their “Paradise Falls” fund.
*You still have participation
fees in insurance, but at least you’re not paying for 100% of damages.
– the story continues –
After 3 failed attempts to save for Paradise Falls, the story now focuses on Carl and Ellie’s daily work. Both of them work in a zoo. Carl sells balloons and Ellie seems to be a tour guide.  Every morning, Carl puts on his uniform, and Ellie helps him put on his tie.  then she gives him a sweet kiss on the cheek as they leave for work.  The scene is repeated over and over again until their hair starts turning white. 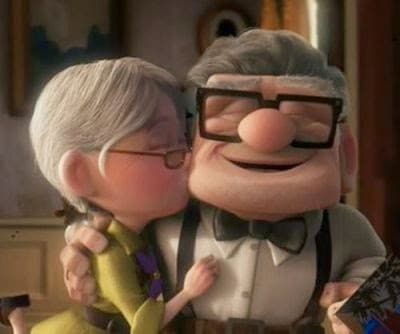 Throughout their 30 to 40 years of working, both Ellie and Carl had the SAME job.  sure they might have gotten pay raises (like the mandatory 5% per year), but with the costs of inflation, that would mean they were only getting by.  I believe this was the most boring part of their lives!  If they had tried to start up a business or just pursue something different, maybe they would have done a lot more than just go to Paradise falls!  Good thing they are just cartoon characters..(or do you know people who might be in their same situation?)

Remember that being entrepreneurial is not just about the money, but as an entrepreneur, you’ll be forced out of your comfort zone in order to provide better products or services.  If in your current job (like Carl and ellie) you’re no longer being challenged or learning anything, then maybe it is time to create your own adventures through entrepreneurship.

– the story continues –
One weekday morning, while they were cleaning their house, Carl noticed their pictures when they were still kids, and he remembered their dream of going to Paradise Falls.  He then proceeds to buy 2 tickets to go to Paradise Falls.  Like the old times, Carl wanted to tell Ellie during their usual picnic on top of a hill.  Unfortunately, Ellie was already too weak and could no longer make it.  Fast forward to the next scene – Ellie being confined to a hospital.

And the next scene shows Carl sitting alone after her funeral. 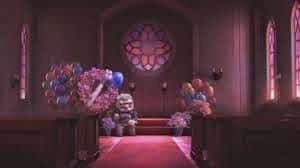 After the 3 attempts to save for Paradise Falls, it seems that Carl and Ellie had forgotten about their goal of going to Paradise Falls.  Their savings jar had been left to accumulate dust in the corner of the shelf. And when it was finally time to go, it was already too late for Ellie. 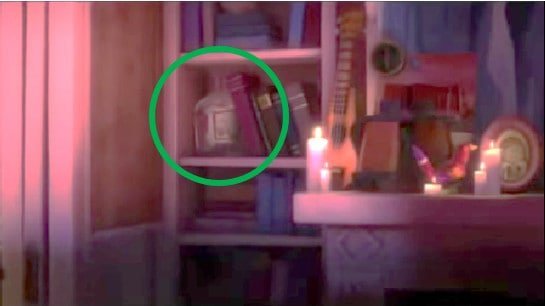 In our everyday routine, it is very easy to forget our bigger goals in life.  After trying and failing many times, sometimes, it is just easier to forget rather than to hope and be disappointed.  And while forgetting may be easier, it certainly won’t lead to a happier and more fulfilling life.

One very important financial tool for this is a vision board.  This is simply a list or a set of pictures to remind you of your most important goals in life. The vision board is reviewed EVERYDAY, so you are always on the look-out on how to turn your dreams into reality.

Carl is now old, alone and shown to be very grumpy.  Then one ramdom morning, a chubby wilderness explorer (boy scout) named Russel shows at his front door to earn “wilderness badges”. The rest of the story (and 90% of the movie) now unfolds as Carl finally goes on an adventure to Paradise Falls by flying his house there through the use of thousands of balloons.  At the end of the movie, Carl has his happy ending with new found joys in his life. 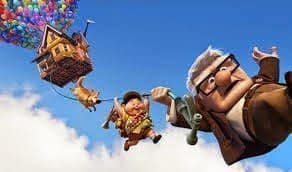 Lesson #5: It’s NEVER too late to go for
your dreams.


At five minutes into the movie, Carl’s life was already soon to be over.  He had already lived 80% of his life.  His lifelong partner, Ellie, had already gone ahead of him.  In fact, Carl has nothing to look forward to, and nothing to live for…
Thankfully, Carl is just a cartoon character and scriptwriters can introduce him to weird characters, make him an adventure and give him his happy ending.
Since we are NOT cartoon characters, who is our scriptwriter?
It’s OURSELVES! (technically, I believe it;s God, but God gave us free will to direct our own stories). You have the power to write your OWN happy endings, no matter how little you think you have left.  So go pursue your dreams, and turn them into reality!
– and your story continues –

That’s the end of this article, and I truly hope it reignites your passion for what you deeply care about!  If your passion has something to do with wealth (or things that wealth can buy), then I invite you to a FREE Online Seminar series called the  “5 Pillars of Wealth”.

I believe that money is just a tool to help us get what we want out of life.  But for money to work for us, we have to study and understand it. So that it ends up HELPING us rather than
preventing us from reaching our goals. This is what the “5 Pillars of Wealth”
is all about. You can get FREE and Instant Access by going to www.GameOfWealthOnline.com.

TrulyRichClub.com – Do You Want to Gain Financial Wealth and Spiritual Abundance at the Same Time?

J3 and I are also being mentored by Bo Sanchez.  First time to invest in the stock market? It is normal to get scared.  But it is also important to have somebody more knowledgable GUIDE you.  Join us HERE and learn how to be TRULY RICH!

« What Are the Benefits of Using Wall Quotes Decals?
Preschool Fast Fact »