*This post was in my Windows Live Writer draft folder for a couple of weeks now!  The news may be #boompanes, but I am  hoping that this quick lesson on Philippine Transfer Taxes, specifically Donor’s/Gift Tax will be a great help for you guys.

By this time, this Instagram photo must be very familiar to you. 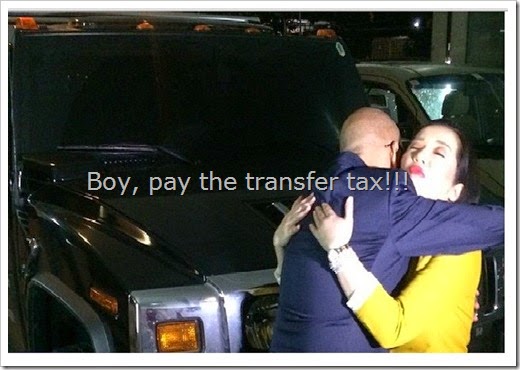 (Wish lang nating she is our friend din, ano?

Around August, Boy Abunda was visibly absent from talk shows he host because he had to undergo surgery because of a liver abscess.  He claimed that his stay in the hospital humbled him.
Days after he was released from the hospital, Kris gave Boy a Hummer.  A photo (shown above) and a video with the following caption documented the gift-giving:

“Because he is my best friend, because I’m so grateful he’s alive & because I want to make him happy. I gave Boy the Hummer tonight after A&A. Uulitin ko, kulang pa this gift because sobra sobra ang pagmamahal, pagtiwala at pag-aasikasong naibigay at patuloy na binibigay niya sa kin. Together w/ my brother & my 2 sons, it’s with Boy that I continue to experience the gift of true & unconditional love. #throughtheyears #iloveboyabunda”

A couple of days later, I heard Kris blurting on A&A (their nightly talk show) about Boy having to pay the transfer tax because she doesn’t want to get in trouble with the Bureau of Internal Revenue.

What Transfer Tax is Kris talking about?

She must be talking about Donor’s Tax. It is a tax on the voluntary transfer of property without consideration, between two or more persons who are living at the time of the transfer, which property was delivered, and accepted by the donee.

On to the boring (but informative) deets (by the way, if you want to know how much the donor’s tax should be, scroll down the post)…

When does a Gift occur?

A gift occurs when the donor surrenders CONTROL over the property.  In this case, Kris is surrendering her control over the Hummer.  If the donor retains an unlimited power to revoke a gift, no gift has occurred.

If the donor does not relinquish control over the property during his lifetime, meaning you can only get the property after the donor dies, the donation is a donation mortis causa subject to the estate tax.

Composition of the Gross Gift:

Rules on Valuing the Gift:

So Boy needs to pay transfer tax pala for the Hummer he received?

How much will the Donor’s Tax on the “Hummer gift” be?

Yep, folks, the Donor’s Tax Due is 30% of the Fair Market Value of the gift.


The Donor’s Tax Rate is this high because the Donee (Boy) is a STRANGER.


But Kris said that “Together w/ my brother & my 2 sons, it’s with Boy that I continue to experience the gift of true & unconditional love.”, right?  Boy surely is not a stranger!

According to the 1997 Tax Code, as amended, a stranger is a person who is not a:

A child of the first cousin of a donor is at the fifth degree of relationship and is considered a stranger.

Donation made between business organizations and those made between an individual and a business organization shall be considered as donation made to a stranger.
Relatives by affinity are also considered strangers (e.g., father-in-law, sister-in-law).  If your father decides to donate a property to your husband, your husband will be considered a stranger because your father and your husband are not relatives by consanguinity.  Your father will be paying 30% of the value of the gift as Donor’s Tax.

What if your father decides to donate a property to you?


Let’s go back to the Kris Aquino-Boy Abunda – Hummer Gift saga.  What if Kris decides to give the Hummer to Bimby instead? Since Kris and Bimby are relatives within the fourth civil degree of consanguinity, donor’s tax due will be based on the graduated donor’s tax rates table.  Like the income tax table, the tax rate gets higher as the net gift gets higher.
The Donor’s Tax Due on this donation will be P644,000.00.

Filing of the Donor’s Tax Return:

Ang taas pala ng Donor’s Tax sa Hummer!  If Kris or Boy failed to pay the Donor’s Tax, what will be the effect? The effect will be that the Hummer cannot be transferred to Tito Boy.

So how should the Donor’s Tax Return Be Filed, what form shall be used, when and where will the filing be made?

The donor will file the return using BIR Form 1800 (Donor’s Tax Return) within 30 days from the Date of Donation at an/the:

The computation of the donor’s tax is on a cumulative basis over a period of one calendar year.  In other words, if the donor makes several gifts during the  calendar year, the gifts shall be added on a cumulative basis.
Kris got a lot of  “vitriol” (a word Boy loves to use in their A&A show), with bashers saying she should have just donated to the poor.  She did claim she donates / gives to charity a lot.  If she gives/donates more than once in a year, here is how her donor’s tax should be computed (pro-forma procedure):
*By the way, if you happen to have inherited properties that are still named after your deceased parents/grandparents/ancestors, please take note that these properties can only be named after you, the legal heir, after settlement of the estate, including the payment of transfer taxes.  Do comment here if you want a post on estate tax/extra-judicial settlement.

« Ditch The Powder Box And Still Look Beautiful!
Getting Ideas for a Children’s Birthday Party »