Some comments in a television show included:

Minimum Wage Earners in the private and public sector are
exempted from withholding tax since January 1, 2006 as a form of focused
support by the government for low income earners.  They were, however, subject to income
tax. This means that every payday, the company they work with does not deduct withholding taxes, but at year-end, if their taxable compensation are subject to income tax, they still have to pay the income tax due.
Under Republic Act 9504 in 2008, Minimum Wage Earners
finally became exempt from income tax, making them, likewise, exempt from
withholding tax.
The statutory minimum wage is not taxable, and therefore,
not subject to withholding income tax.
The following are also exempt from income tax:
WHO IS A MINIMUM WAGE
EARNER?

A minimum wage earner is a :
* Worker in the private sector who is paid the
statutory minimum wage.
The  daily minimum wage rate for
workers in the National Capital Region as of March 20, 2015 is P466.00 plus P15.00 COLA.
WHAT IS STATUTORY MINIMUM
WAGE?

Statutory Minimum Wage shall refer to the rate fixed by the
Regional Tripartite Wage and Productivity Board (RTWPB), as defined by the
Bureau of Labor and Employment Statistics of the Department of Labor and
Employment (DOLE).  The RTWPB of each
region shall determine the wage rates in the different regions based on the
established criteria and shall be the basis of exemption from income tax for
this purpose.
SUMMARY OF DAILY MINIMUM WAGE RATE AS OF MARCH 20, 2015 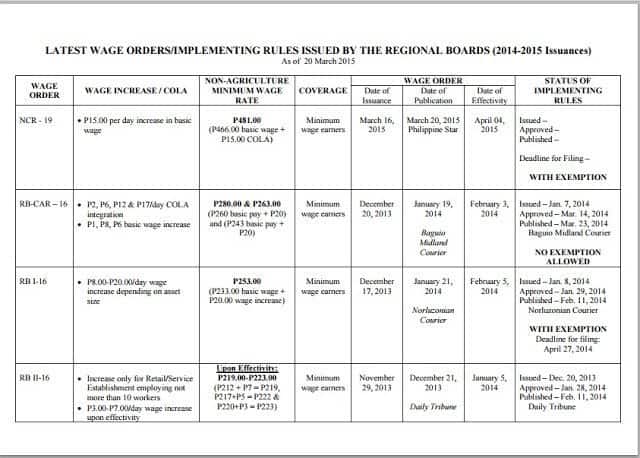 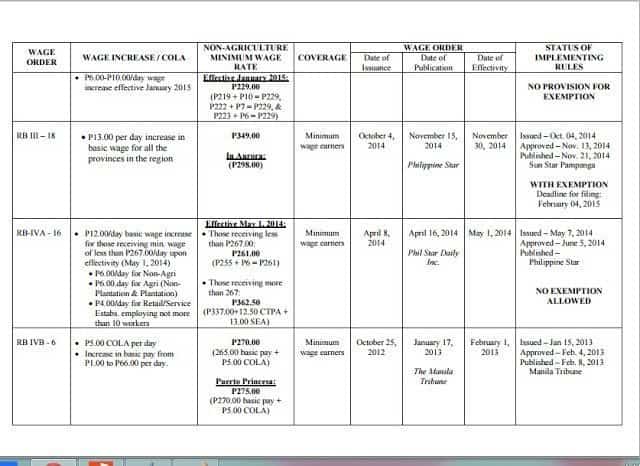 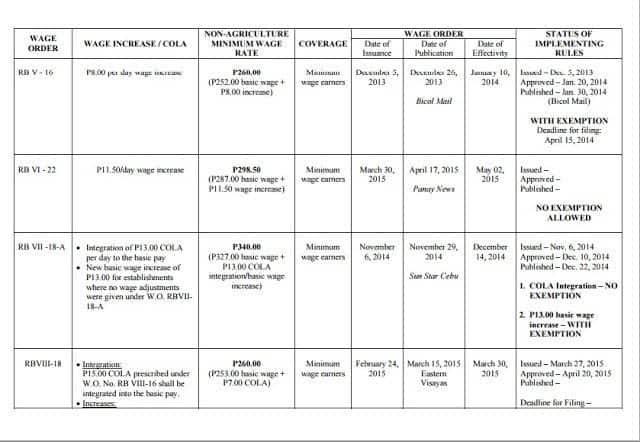 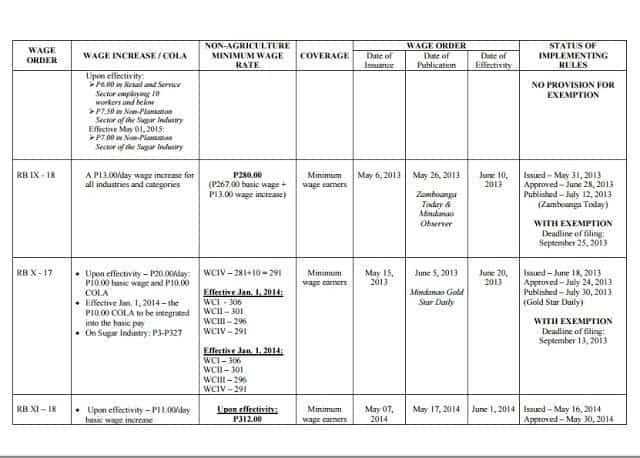 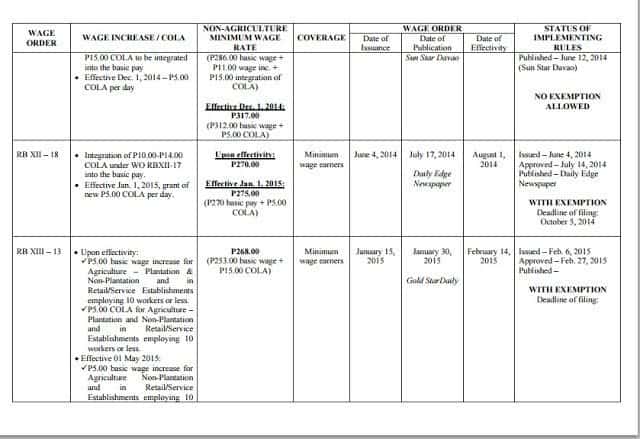 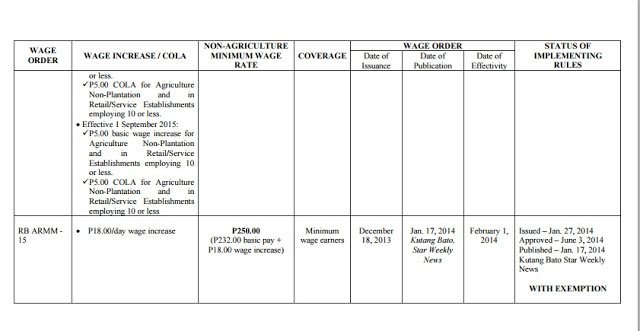 An employee who receives/earns additional compensation such
as commissions, honoraria, fringe benefits, benefits in excess of the allowable
statutory amount of P30,000.00 (now P82,000 under R.A. 10653), taxable allowances and other  taxable income other than the STATUTORY
MINIMUM WAGE, HOLIDAY PAY, OVERTIME PAY, HAZARD PAY AND NIGHT SHIFT
DIFFERENTIAL PAY shall not enjoy the privilege of being a MINIMUM WAGE EARNER
and therefore, HIS/HER ENTIRE EARNINGS ARE NOT EXEMPT from income tax and
consequently, from withholding tax.
RULE ON MINIMUM WAGE
EARNER RECEIVING MIXED INCOME

MINIMUM WAGE EARNERS receiving other income, such as income
from the conduct of trade, business, or practice of profession, except income
subject to final tax, in addition to compensation income are not exempted from
income tax on their entire income earned during the taxable year.  This rule, notwithstanding, the statutory
minimum wage, holiday pay, overtime pay, night shift differential pay and
hazard pay shall still be exempt from withholding tax.
WHAT IS HAZARD PAY
AND THE TAX RULE THEREON?

Hazard pay shall mean the amount paid by the employer to
minimum wage earners who were actually assigned to danger or strife-torn areas,
disease-infested places, or in distressed or isolated stations and camps, which
expose them to great danger of contagion or peril to life.  Any hazard pay paid to minimum wage earners
which does not satisfy the above criteria is deemed subject to income tax and
consequently, to withholding tax.
NON-COMPENSATION
INCOME EARNERS WITH INCOME NOT EXCEEDING THE MINIMUM WAGE THRESHOLD ARE SUBJECT
TO INCOME TAX.

This was one of the emerging issues when Minimum Wage Earners
were exempted from income tax.
Self-employed and non-compensation income earners  earning an amount equal or less than the
minimum wage rate are required to pay income tax.  Is this a violation of the “ability-to-pay”
principle and a  violation of the equal
protection clause?
Related:  How To File Your Income Tax Return in the Philippines


Determining
the minimum wage on a monthly basis

Clarifications on a minimum wage
earner’s income tax exemption (i.e. Because of the increase  in minimum wage rate, some employees who used
to be taxable will now be considered     Minimum Wage Earners. When will they
become tax exempt?)