Way, way back when we were kids, Halloween in the Philippines was celebrated differently, and in a big way.  Sure, we went around in scary costumes on the 31st of October.  And the costumes were made by us, mind you.  We only had little shops in our city which sell yards and yards of black and white cloth, fake cobwebs, plus plenty of Halloween accessories.  The big mall which intends to kill pine trees was practically non-existent back then.  Actually, that place where that mall is now used to be the site of Pines Hotel, which burned in the early 1980’s, during a big US/Filipino War Veterans Convention.  A lot of the elderly war veterans and their wives died, practically fried alive, there.  It has since been (before SM Baguio was built, that is) a favorite ghost haunting spot for locals and tourists, where balls of fire have been rumored to shoot all over the place in the dead of night.  But, I digress (as always).

So, anyway, we improvise our Halloween costumes by using white bed sheets, our mom’s red lipstick for the blood, plus her black eyeliner, of course, for those scary black eyebags.  My older brother would put on my dad’s trench coat and  put it way above his head, so he would look headless.  That never fails to make my younger cousin, Josephine, pee in fear.

But the real Halloween wonder for us was on November 1 and 2, which are officially Holy Days in this predominantly Catholic country.  This means no school for all of us who go to Catholic Schools.  On November 1, we prepare ham and egg sandwiches, plus boxes of juice to bring to the cemetery.  Yup, it is practically a big party place out there!  We trek to the cemetery on foot, offer flowers and candles to our dead relatives’ grave stones, and practically have a blast, staying there till the late afternoon.

I am so not kidding.  It is like one big reunion party because we meet relatives we haven’t seen for long (for a year, anyway, because the last time we saw them was the previous year on this same date). We stay there till the late afternoon, eating and horsing around,and if one cousin brought his boombox, it is “parteey!” (Authorities were not strict then.).  Some families actually bring pancit and other typical Filipino food and eat right there.

We don’t do this anymore.  I used to regal my children with stories of our graveyard escapades (plus a few ghost stories when we were there cleaning one relative’s graveyards), but they never can get it why we had so much fun back then.  I think life was much simpler then, and we found beauty in its simplicity.  Children today are wired and connected and has turned blase on anything that is simple.

And they insist on having their own Halloween costumes, too. 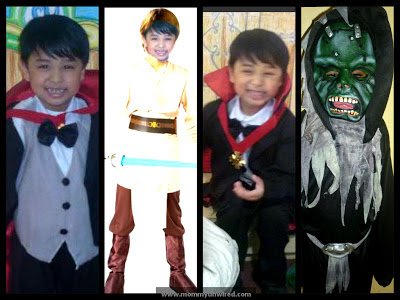 Here’s Adrian in a vampire and monster costume, plus his dream “Luke Skywalker” costume which never happened, mainly because I had no time to make it and stores don’t have the costume either…

plus old Halloween pictures of my two girls, with cousins and friends… 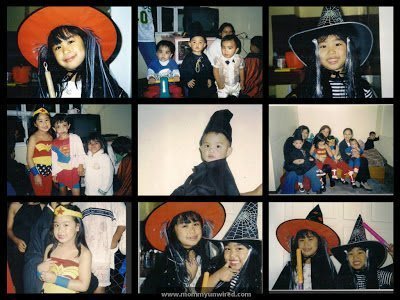 P.S.  And there goes NaBloPoMo Day 7. (23 days more to go and I am already having a gigantic headache hehe)