Sometime around May (I think it was around the 31st), I was on my way to work when I saw this car at Leonard Wood Road, Baguio City in front of The 45 Hotel: 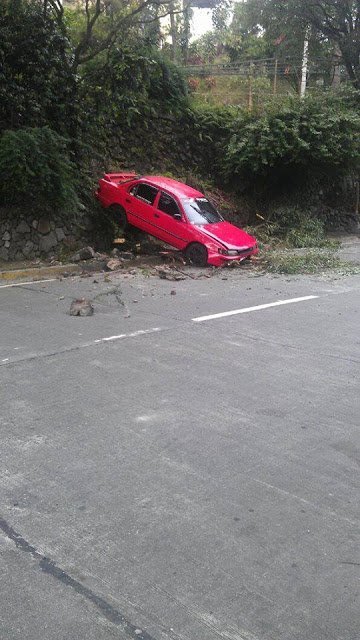 It doesn’t look like much, right, but that car came from the road above (going to SM Baguio) and landed on the road below!  Either the driver wanted to do a Flying Car thing or desperately wanted to do number 2 and did a shortcut  or he was driving “under the influence”.

Fortunately, this happened at around 3 or 4 A.M. Otherwise, it would have hit other vehicles and pedestrians, since these roads are VERY busy roads at daytime.

I am not judging the driver, who claims he was not drunk, but Baguio does have the most treacherous roads.  Winding roads perpetually wet during the rainy season mixed with drivers in alcohol or other substances usually make scenes like this one so common: 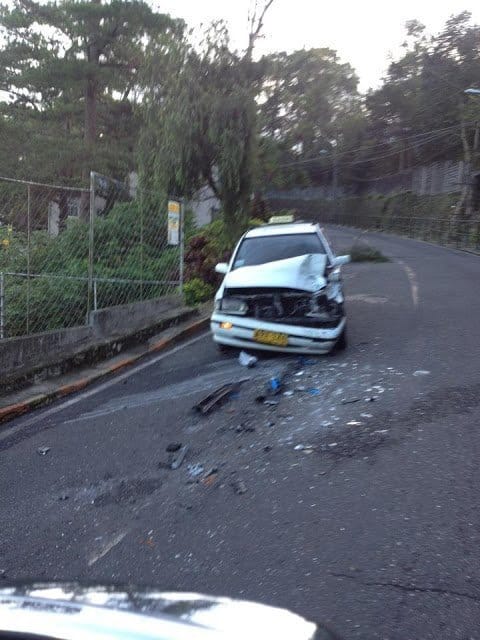 Fortunately, with Republic Act 10586, otherwise known as “An Act Penalizing Persons Driving Under the Influence of Alcohol, Dangerous Drugs and Other Similar Substances”, the government is finally going after these drivers under the influence of alcohol or dangerous drugs who have been endangering their own lives and others that they need drastic help from Braden & Tucci and https://www.toddlandgren.com/dui-felony/

RA 10586 gives law enforcement officials the authority to conduct sobriety and breath alcohol tests on drivers. The DUI law also provides for mandatory testing on those involved in vehicular accidents to check if they were driving under the influence of alcohol or dangerous drugs.

The law also provides that refusal to undergo tests is a crime and shall be penalized accordingly.

Great.  Because they do always insist they are sober when they can’t even talk or walk straight (slurring “Hindi ako lashing!”
while walking in a curvy line while trying to touch their nose mode)

Republic Act 10586, otherwise known as “An Act Penalizing Persons Driving under the Influence of Alcohol, Dangerous Drugs and other Similar Substances,” is the law that penalizes persons who operate motor vehicles while under the influence
of alcohol and/or dangerous drugs.

The Philippines has an existing policy under the Land Transportation and Traffic Code (RA 4136) which prohibits driving while under the influence of liquor or narcotics. However the penalties are light and only a few drunk drivers ever get arrested because there is no standard procedure for determining whether a motorist is DUI or not.

The 1991 Local Government Code also gave local government units the power to implement their own traffic management systems, examples of which are the Makati Traffic Code (City Ordinance 2003-089) and the City Ordinance 2005-039 of Caloocan City.

Under these ordinances, drunk drivers are penalized with a paltry P2,500 fine, imprisonment or both.

Are random tests allowed under the law?

No. The law states that there must be probable cause before a deputized law enforcer can apprehend a motorist on suspicion of DUI. Indications of DUI include swerving, overspeeding, lane straddling, weaving, sudden stops, poor coordination or the evident smell of alcohol on a person’s breath. However, to prevent drugged driving, Sec. 15 of R.A. 10586 authorizes the Land Transportation Office (LTO) to conduct random terminal inspections and quick random drug tests of public utility drivers.

Who are authorized to enforce the provisions of this Act?

The LTO may deputize traffic enforcement officers of the Philippine National Police (PNP), the Metro Manila Development Authority (MMDA) and cities and municipalities to enforce the provisions of this Act.

The initial tests to assess and determine intoxication are field sobriety tests which include the horizontal gaze, the one-leg stand, the walk-and-turn and other similar tests as determined jointly by the Department of Health (DOH), the National Police Commission (NAPOLCOM) and the Department of Transportation and Communications (DOTC).

What happens if I fail the field sobriety test?

If you fail the field sobriety test, the deputized law enforcement officer will determine your blood alcohol content (BAC) through the use of a breath analyzer or similar measuring instrument.

If the law enforcement officer has probable cause to believe that you were driving under the influence of dangerous drugs,
it shall be his duty to bring you to the nearest police station to be subjected to a drug screening test and, if necessary, a drug confirmatory test as mandated under R.A. 9165.

Is the alcohol and chemical testing of drivers involved in motor vehicle accidents mandatory?

A driver of a motor vehicle involved in a vehicular accident resulting in the loss of human life or physical injuries shall be subjected to chemical tests, including a drug screening test and, if necessary, a drug confirmatory test as mandated under R.A. No. 9165 to determine the presence and/or concentration of alcohol, dangerous drugs and/or similar substances in the bloodstream or body.

What if I refuse to undergo the mandatory tests?

A driver of a motor vehicle who refuses to undergo the mandatory field sobriety and drug tests shall be penalized by the confiscation and automatic revocation of his/her driver’s license in addition to other penalties provided herein
and/or other pertinent laws.

If the violation did not result in physical injuries or homicide, the penalty of three months imprisonment and a fine ranging from P20,000 to P80,000 shall be imposed.

If the violation resulted in physical injuries, the penalty provided in Article 263 of the Revised Penal Code or the penalty in the next
succeeding subparagraph, whichever is higher, and a fine ranging from Php100,000 to Php200,000 shall be imposed.

If the violation resulted in homicide, the penalty provided in Article 249 of the Revised Penal Code (reclusion temporal) and a fine ranging from P300,000 to P500,000 shall be imposed.

Will the operator and/or owner of the offending vehicle be held directly liable?

The owner and/or operator of the vehicle driven by the offender shall be directly and principally held liable together with the offender for the fine and award against the offender for civil damages, unless he or she is able to convincingly prove that he or she has exercised extraordinary diligence in the selection and supervision of his or her drivers in general and the offending driver in particular. This applies principally to the owners and/or operators of public utility vehicles and commercial vehicles such as delivery vans, cargo trucks, container trucks, school and company buses, hotel transports, cars or vans for rent, taxicabs and the like.

How is the government preparing to enforce this Act?

Within four months from the effectivity of this Act, the LTO and the PNP shall acquire sufficient breath analyzers and drug-testing kits to be utilized by law enforcement officers and deputized local traffic enforcement officers nationwide giving priority to areas with high reported occurrences of accidents. To acquire this equipment and for the training seminars of deputized law enforcement officers, the LTO shall utilize the Special Road Safety Fund of the Motor Vehicle User’s Charge. Additional yearly appropriations for the purchase of breath analyzers and drug-testing kits shall be provided annually under the General Appropriations Act.

Every applicant for a motor vehicle driver’s license shall complete a course of instruction that provides information on safe driving including, but not limited to, the effects of the consumption of alcoholic beverages on the ability of a person to operate a motor vehicle, the hazards of DUI of alcohol, dangerous drugs and/or other similar substances, and the penalties for the violation thereof.

Every applicant for a professional driver’s license or for renewal thereof shall undergo this driver’s education course. The driver’s
license written examination shall include questions concerning the effects of alcohol and drug intoxication on the ability of a person to operate a motor vehicle and the legal and pecuniary consequences resulting from violations of the provisions of this Act.

When will the implementing rules and regulations (IRR) of R.A. 10586 be promulgated?The DOTC, DOH and NAPOLCOM are jointly preparing the IRR and will promulgate them before the end of September 2013.