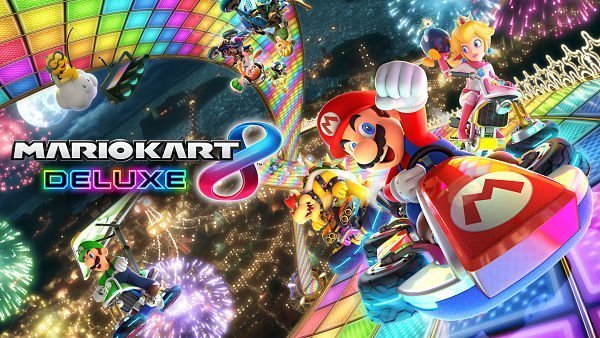 Who else grew up playing Super Mario?

One of the secret reasons (aside from I want to take time off from the kids playing video games🤣) I got a Nintendo Switch is because it has Super Mario.

And for my kid’s Switch, I got Mario Kart 8 Deluxe (for me shhhh)!

Mario Kart 8 Deluxe is based on the Nintendo Wii Mario Kart games.

Some hardcore gamers may be disappointed and see this as a downside, but for me, it is a solid upside.

I loved Mario Kart on Wii, so I will probably have a lot of fun with this game!

✅ The game runs at 1080p as opposed to 720 on the Wii.  This translates to much smoother images and real time movements which is very important for a game like this.  This also ends the constant “lag” arguments that happen when someone loses a race.

✅ It comes with around 50 race tracks with cool and challenging obstacles. I could race endlessly if not for my son bugging me to let him play!

✅ On top of our favorite Mario Kart characters, 5 new characters have been introduced:

✅ There are also some cool kart designs that your kids will love.

Is it easy to play?

As far as “playability” is concerned, the Mario Kart 8 is very well adapted to the Nintendo Switch System.

You can split the screen between up to four players, and if you link several systems together you can have twelve players racing against each other.

What is more, you can clutch two items at the same time.

It also has a smart steering option, making it much easier for younger kids in the family to play this edition of Mario Kart than previous editions. All in all, it is a pleasant experience for long time players and newcomers alike.

Battle Mode has been changed the most of all, though. Not massively.

You can still play the usual games which involve squaring off against the characters, or other players, in challenges that let you test your skills. Most of the games are still pretty much the same, but there are some cool and interesting upgrades to them.

In Balloon Battle there is much better, smoother movement. Shine Thief is much more detailed as well.

There is also a new game: Renegade Roundup. In this mode you are split into teams and one will try to capture the other team and put them in jail, a bit like cops and robbers. You are under a time pressure to complete the challenge, but the escaping team has an ace up their sleeve: they can sneak up and release their teammates from prison.

Other than the graphics,  this game really isn’t much different from the latest Wii editions of Mario Kart. It is not a bad thing, though.

If you know your kids love Mario Kart (I do!), then this will guarantee hours of fun during quarantine.

« Review: The Legend of Zelda: Breath of the Wild
Animal Crossing Is a Great Quarantine Fix »