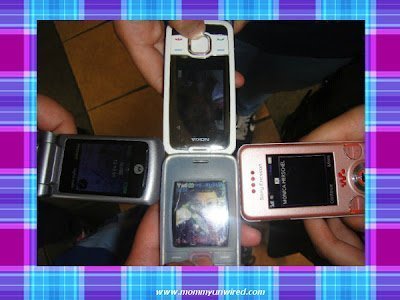 Let’s face it.  Cell phones are part of our lives.  Sure, they annoy you. They have you working on vacations and the boss can reach you anytime of the day, or night for that matter (heck, I do receive calls at midnight, too! ).  However, once you have a cellphone, it is pretty hard to give it up.  Even if it distracts you.  Even if it annoys you.  Yup, your phone is like your annoying best friend you can never ditch.
Paula, my 16-year old daughter, went to UB Science High School and although it is a science high school heavy on Latin maxims and phrases like Carpe Diem and verbum sat sapienti (literally meaning “a word is enough for a wise man” or “one word to the wise”.  I had to attend a meeting in my daughter’s freshman year and I heard the principal say this.  Every student  kept quiet, they literally shut up, after he said this.  It was like magic.  Discipline in high school. So happening. I was amazed.I should say that at home!) and speaking Tagalog and being caught in your uniform in any part of the city even after school would merit a VR (Violation Report), cellphones are allowed as long as you don’t use it in class and it is on silent mode.  I think giving her a cellphone helped a lot because we can reach her during times when we have to pick her up from school (Baguio can have violent rainstorms in the afternoon, you know) and she can reach us when she accidentally leaves an important homework at home.
My 14-year old daughter, on the other hand, goes to a Catholic school ran by the ICM sisters, with the same principal for over 30 years now.  I went to the same high school, way back when it was still an all-girl school (with the same principal), and the rules haven’t changed much. (The first time I went back to the school when I enrolled my daughter, I thought I was in a time warp.  It looked absolutely the same like it did 25 years ago!)No heavy earrings, no makeup, skirts should be five inches below the knee, your socks should be folded around an inch, you cannot go anywhere else during breaks and lunchtimes and you cannot have a cellphone.
The last rule was pretty hard because the high school is in a part of the city that has heavy traffic.  My daughter always has to be picked up.  We worked into an arrangement of waiting at a certain place to pick her up, which was extremely difficult,because waiting can be annoying if you can’t call her and ask what is taking her so long.
Anyway, on her birthday in July, I got her a Samsung Galaxy Pocket which she judiciously took care of, rarely bringing it to school and only on occasions when she was not sure what time she will be dismissed, so she can quickly text us, away from the prying eyes of a teacher.
On Friday, she brought her cellphone with her.  It was her school’s cheering competition and she was not sure what time the school will dismiss the students.  Besides,she has been sick for a week and has not been really feeling well the whole week.  I just literally forced her to go to school because she has already missed a lot of schoolwork when she skipped school for four days on account of her being sick.  I allowed her to bring the cellphone, but to keep it in a safe place on silent mode, telling her to text me if she felt sick.
A little after lunch, she texted me asking if I can pick her up because she was feeling dizzy.  I asked my cousin to pick her up instead.  Problem was, the students were not allowed to go home and should watch the volleyball games first.  My cousin has to go their school office to ask permission to bring my daughter home. The school officer asked my cousin how she knew that my daughter had to go home, and that was when she demanded for my daughter to turn over her phone and to get it back after a week.
Honestly, I knew that my daughter was violating a school policy because she did bring the phone to school even if the school expressly prohibits her to do so.  I think I am partly at fault, too, because I knew she brought the phone to school and didn’t remind her of the school policy. Technically, she was probably breaking the rules by texting me, but if she hadn’t texted me, I wouldn’t have know she was feeling sick and needed to go home.  The school never calls on times like this.  They just ask the student to lie down in the clinic and wait for dismissal time.
Cellphones can be sources of distractions in a classroom, just like talking and passing notes, but they can also be of great use during emergency situations.  If a student is responsible enough to use the cellphones discreetly outside the classroom, after class (she texted during lunchtime) outside the radar of a teacher or a school officer, should her cellphone be confiscated because the officer learned she used her phone (without her actually catching the student doing the texting.  She just put the pieces together)?
I honestly think this rule should be changed.  Teachers sometimes text in plain view of the students in between classes, and the students react negatively to this.  Allowing the students to bring their cellphones would allow them to learn the consequences of using them responsibly as opposed to using them inappropriately.

So, what do you think? Should schools confiscate cellphones?