By: Gabrielle Nicole B. Bulatao

(Note: This was a post my fifteen year old daughter wrote, unedited, in response to my concern on why she changed her musical taste – from being a big One Direction fan to a rock music fan.)

It is believed that music can save lives, but what kind of
music are people exactly thinking about? What genre does “music that save
lives” specifically fall under? Our generation seems to have problems with
their self-esteem due to society’s unreachable expectations. People cope with
it through music.
As a 15 year old girl who had lots of experiences going
through lots of bullying, self esteem issues and such, because well society…
I needed music I can relate to, musicians that would write
something so
symbolic and beautiful that mere muggles couldn’t understand. I used to listen
to pop music but after realizing that the lyrics “you a stupid hoe” and “my
hump, my hump, my hump, my lovely lady lumps” weren’t actually relatable
songs.  So I decided that I would spend
an entire summer night scrolling through the “music saved my life” tumblr tag,
and I was seeing this familiar band names “Pierce the Veil”, “Of Mice and Men”,
“Sleeping with Sirens”, “Bring Me the Horizon” and “All Time Low”(I knew ATL
because of my sister). Since I knew All Time Low I decided to listen to the
other bands songs. I got to know them a lot better and started listening to
their songs. People started questioning me why I changed my music taste; I went
from being a directioner to a person who adores punk-pop, punk-rock and
post-hardcore, mexicore ;o. People started to think that is was easier for me
to get “possessed” by a demon. I just laughed at them ‘cause they obviously
listen to the way the songs sounds like, not the lyrics. People usually think
that people who are catholic can’t listen to songs like this because it is
classified by people as “Satanist music”, which pisses me off because some
people think this way, where is the logic? Why would you say that? Please
explain, elaborate and give hard evidence that people actually became Satanists
because of this kind of music.
Pierce the Veil has the most deep and meaningful albums I’ve
ever listened to, even their album art has a meaning. Imagine that. I asked my
sister to draw the album art on a canvas, someone saw it and freaked out when
she saw the girl above the broken, burnt down house.
According
to vocalist and rhythm
guitarist Vic
Fuentes “The theme to the album artwork is
‘jumping off of the ground that is breaking beneath you.’ The idea is to
inspire hope amongst the chaos that may be happening around you. If the ground
was breaking beneath your feet, your first reaction may be to run and jump to
safety, and it’s that moment where you are suspended in the air that I am
focusing on. A still frame where you’re not sure if the person is falling or
flying. It’s about freeing yourself from the things that are breaking or
falling apart in your life, and inspiring a sense of hope from the
desperation.” 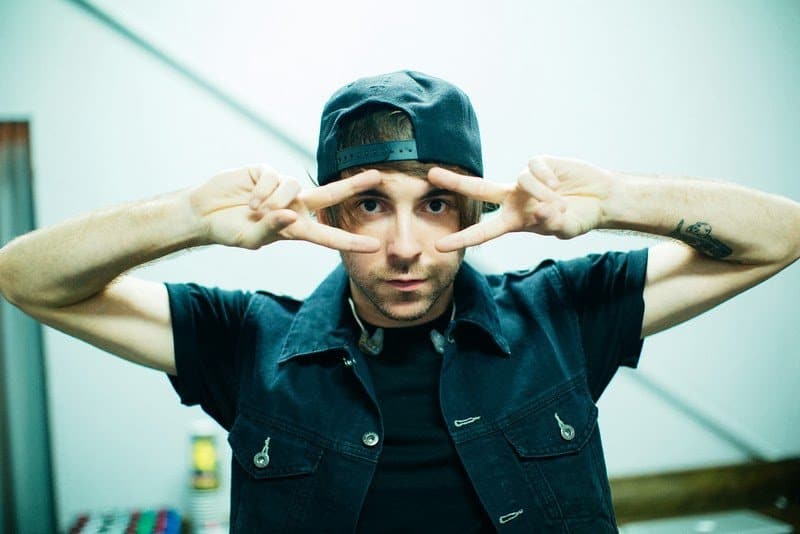 My
favorite tracks of this album were “May These Noises Startle You in Your Sleep
Tonight”, “Bulls in the Bronx” and “Hold on Till May”. These songs have deep
meanings, it isn’t that obvious but if you listen closely you’ll understand it
and maybe even relate to it.  “May These
Noises Startle You in Your Sleep Tonight” basically talks about burning the
house you grew up in because of all the terrible memories and experiences that
you had there. “Bulls in the Bronx” was dedicated to their fan that committed
suicide at the age of sixteen. “Hold on Till May” was written for a girl Vic
(lead singer) used to date, she told him that she was neglected by her parents
as a child so she used to climb up a tree, hiding from her parents just to see
if they would notice she was gone or look for her. If you want to read more
about it you can click here for
Collide with the Sky and here for Selfish Machines.
So next time you tell someone who
listens to post-hardcore to stop listening to it and start listening to pop ask
yourself which means more “If I were you,
I’d put that away. See, you’re just wasted and thinking about the past again. Darling
you’ll be okay.” and “If you stand for nothing, you’ll fall for anything.”, “Don’t give up because you’re losing.” or “Ass ass ass ass ass ass ass ass ass ass ass ass
ass ass ass ass ass ass ass ass ass ass.” And “I’ma make you
my bitch. Cake cake cake cake cake cake cake cake cake cake”. Think about it.
Pop songs this generation are usually about drugs and drinking and allow those
other things. I’m pretty sure I cleared the minds of people who judged me for
my so called “bad taste” in music.
Before this
gets too long, let me leave these inspirational quotes that helped me whenever
I was feeling down…
Austin Carlile
(Of Mice & Men): Be your own person because no one can ever
take that away from you, no one.

Alex Gaskarth (All Time Low): It’s more
important to be yourself and turn into   the
person you aspire to be than it is to let people change you.

Kellin Quinn
(Sleeping with Sirens): Wrists are for bracelets, not for cutting.

Mitch Lucker
(Suicide Silence): You only live once, life is really short..
don’t let anything minuscule like that keep you down. Keep your head up.

Austin Carlile
(Of Mice & Men):If you’re a fan of hurting others, talking
down to, or trying to bring others down, then never call yourself a fan of
mine.

Alex Gaskarth
(All Time Low): I want you to pinky promise me you won’t do
it. No fan of mine will kill themselves. Don’t do it, for me. I love you.

« Top Four Myths Preventing You From Getting an Online Education
MedelaMoms Launches “Seeing Doubles”: A Support Group for Moms with Multiples »