I grew up to this sight.  I remember walking home from school not seeing what was in front of me.  Back then, I truly dreaded the fog, because I, like any kid with over-active imagination in a world with no internet , would imagine creepy creatures coming out of the fog.
We used to ghost hunt when we were in our teens.  We would sneak out late at night when the folks were asleep and speed away in my dad’s white Volkswagen Beetle.  We would drive through the site of Hyatt Hotel which crumbled like dominoes in the 1990 earthquake , through Loakan Road looking for the White Lady and Marcos Highway.  Of course, it was not like the real ghost hunting stuff that other folks do.  We just drove over, my cousin would pretend the car’s engine stalled (but there was a couple of times he did not pretend!), and we would scream our fright out. At midnight. 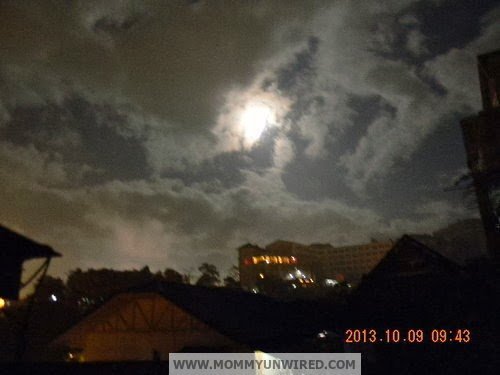 I will be coming up with a Halloween Special: Creepy Stories in Baguio City in a couple of days.  During those ghost-hunting days, I never did see a real “live” (or “dead”???)  ghost, although we did experience some real weird stuff.  Have you ever seen a real one?
I am glad I did not and I hope I never will.  But oh, there was this one time that something really creepy showed itself to me.  To this day, I am still wondering if I have seen a ghost, but most probably I did…
January 2007 has been a pretty bad month for me… My mom got diagnosed with meningioma (which I found out on Christmas Day 2006) and had to stay for three days in the hospital practically the last days of December.  She never recovered when she got home and I had to deal with her slowly losing her memory and motor strength…On the third week, Adrian, who was around one year old and six months around that time suddenly started vomiting and pooping at the same time.  I had to admit him to the hospital because he was getting really dehydrated.
You know how difficult it was to have a toddler with an IV?  The funny thing was that SLU Sacred Heart Hospital where he got confined never gave him a plastic IV bottle.  He probably broke a couple during his stay there because he was sobrang likot.  Besides, he was well when he was in the hospital.  He was not vomiting and pooping anymore.
On our third day when we were about to go home, I was carrying Adrian by the door. (I was bored silly I felt the urge to ogle at people and see what kind of illnesses they had)  A boy who must be around twelve or thirteen in a hospital gown passed by and looked at me sharply.
I said, “What happened to you?!”  He had bumps and bruises all over his body and his eyes were sunken.
Hubby came to me and said, “Sinong kausap mo diyan?”
I told him, “You did not see the boy?”  He had bump and bruises all over his body. Parang nabugbog or naputukan lang naman sa mukha ng firecracker ang peg.
He went, “Walang pasyente sa wing na yan ano!  Di ko nga nakita kausap mo!”
I gave Adrian to him and went to the hospital wing where the boy went.
The place was deserted.  There was nobody there.  Apparently, the hospital will be renovating that pedia wing and turn it into a laboratory.
To this day, the way the boy looked at me still haunts me…
And to this day, I still wonder if he was a ghost for real…
Oh, wait till you hear about that time I went inside Mario’s bathroom (Mario’s relocated at the old Lonestar Steak House at Camp John Hay in the late ’90s after a fire gutted their original resto at Session Road)…
And that time I got confined at the SLU Hospital because of anaphylactic shock (dahil sa fish ball, which I will make kuwento in a future post) and a “mambunong”  (a native witch doctor or something) suddenly barged in and started chanting mumbo-jumbo over me and my bed.  The people he was with later told me that apparently, anyone who gets confined and uses that bed – yes, the bed I was lying in – dies.  I have to contact my doctor (who was out playing golf on that sunny Sunday) and beg him to discharge me that day.

« {Money Mondays} Teaching Your Child About Money
Make Your Own Haunted House! »