It has been raining really hard the whole day and I have been seeing Color- Coded Rainfall Advisories in Social Media.  Here is an infographic on MAKING SENSE OF PAG-ASA’S COLOR-CODED RAINFALL ADVISORIES: 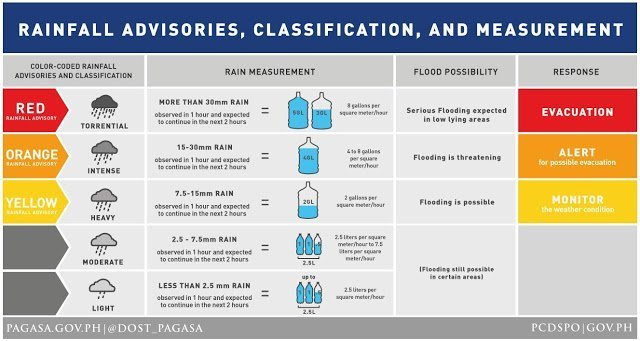 The flood alerts
Under the heavy rainfall warning system, a yellow rainfall advisory is raised when the expected rainfall amount is between 7.5 mm and 15 mm within one hour and likely to continue.
Communities given this advisory are advised to be aware of the weather condition and warned that flooding may be possible in low-lying areas.
The orange  rainfall advisory is raised in areas where rainfall is between 15 mm and 30 mm within one hour. Flooding is a definite threat in communities under the orange alert.
A red  rainfall advisory is issued when downpours constitute an emergency. This is raised when observed rainfall is more than 30 mm within one hour or if rainfall has continued for the past three hours and is more than 65 mm.
When PAGASA raises a Red warning, communities should be prepared to respond. It means serious flooding is seen and that residents should be ready to evacuate to safety.

As suggested also by blogger Steven Dela Cruz in a comment, you guys should also check out Project NOAH (Nationwide Operational Assessment of Hazards) .  It gives you a live update on weather outlook and flood situation.  (I am checking on Baguio now because although it has not been raining hard yesterday (August 19) and early morning today, the wind has been howling mad since 3 PM  (I remember years ago when Pepeng unleashed his fury and I was on a seminar with officemates from the Ilocos and Pangasinan regions.  They were spooked by the wind, because it was howling!  They were like “Ate, is a dog howling?” cause it did sound like a dog) and the rain has been pouring non-stop).

« Of Cable and Satellite TV
Getting Your Dream Job »