It is NaBloPoMo Day 16 and I am totally stumped on what to write.  I have consistently avoided using the writing prompts, but I am trying this one out:

Would you buy your dream house if the price was right BUT you also were told it was inhabited by ghosts? 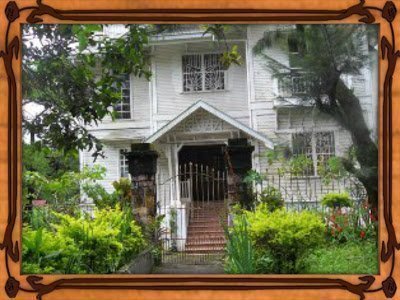 Ghost haunting teenagers (which my cousins and I were, decades ago.  Remind me to tell you about our ghost haunting escapades in another post) love passing by this house and hoping to see an apparition of a girl on the front steps.  This house, built in the early 1900’s was home to the Laperals.  Accounts say the Laperals are one of the oldest clans in Baguio.  In World War II, this house became some sort of headquarters of the Japanese soldiers and it was told that members of the family along with other Filipinos were brutally murdered in the house.
The house has remained empty, except for caretakers who live outside the house.  There were tales of apparitions seen, footsteps and moans heard.
My brother, who happened to pass by the house, along with a cousin swore he saw a woman looking at them by the upstairs window.
I still have to see any apparition there (not that I crane my neck to look at the window when I pass there), but the place does give me the creeps.
And I definitely would not want to live there.
Would you want to live in a haunted dream house?